He started rocking out as a kid, found jazz early and wound up playing in a country band.

Clearly, Jason "Slim" Gambill is not one to be constrained by limitations. Or expectations.

The Nebraska-born, Colorado-raised guitarist is, of course, best known for his 13 years of working with country hitmakers Lady A, a key adjunct in the trio's rise to multi-platinum, award-winning fame thanks to his hot licks and his trademark two-foot-long braids. But Gambill draws from a deep musical well, and his recent albums -- FAKE JAZZ & THEME SONGS, LCD -- as well as his buoyant new single "Up" and music that's to come are the work of someone with endless ambition and no boundaries on his ambitions or imagination.
"I love sideman land, but it's cool to put your own music out," says Gambill, who now resides in Nashville. "Jazz and blues, and classic rock, is what got me into the guitar bug and practicing and learning, so this is kind of almost circling back around to where I started. It's an amazing outlet I haven't had for a long time, where I can do whatever I want." 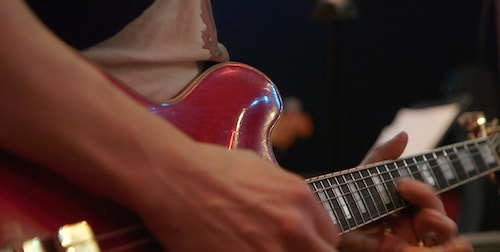 Gambill's passion for music was born in Colorado Springs, where his family moved when he was eight years old. He began playing guitar when he was nine, learning on his grandmother's old acoustic, and became "obsessed" with the Woodstock documentary he first saw when he was 12 years old, transfixed by iconic performances from Jimi Hendrix, Richie Havens and Alvin Lee of Ten Years After. He was also informed by his parent's collection of classic rock albums, subsequently discovering contemporary guitar heroes such as Stevie Ray Vaughan.

A crucial turning point came when Gambill was exposed to jazz at 15, after joining the high school stage band. "The band director gave me an opportunity I didn't really deserve, and I didn't have the foggiest idea what I was doing," he recalls. "But I practiced and worked hard and listened, and I got to be pretty good at reading big band charts, and other guys in the band who knew what they were doing exposed me to a lot of (music)." 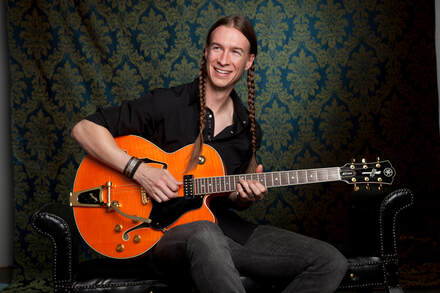 That included George Benson, whose BREEZIN' album Gambill discovered in a  local library when he was 14 years old. It became "gateway drug...the first 'jazz guitar' record I was ever exposed to." That in turn led him to records by Freddie Hubbard, Wes Montgomery, Miles Davis and Mahavishnu Orchestra, whose PANGAEA and BIRDS OF FIRE albums, respectively, helped the fledgling muso connect the dots between rock and jazz.

Gambill "changed majors a bunch of times" at the University of Southern California, learning to be "a theory geek who can analyze  stuff with the  best of them."
He was not a particularly prolific transcriptionist, however, which led him to focus on recording arts and the school's Studio Jazz Guitar Program. "First and foremost I've always been a composer and a writer," he says. "With my guitar playing I tend to come up with my own thing, informed by a lot of stuff I heard. I didn't sink into formal education, as a player, that well."
During his time in Los Angeles Gambill was part of the band Firstman, that had a brief deal with Atlantic Records. That was also where frontman Joe Firstman gave Gambill his "Slim" nickname; "He started calling me that and it just stuck. I have friends who forget what my first name is. My mom still calls me Jason, but that's about it." Gambill's braids, meanwhile, were the suggestion of a modern rock band Gambill played with during the early 2000s, which initially asked him to cut his long hair but settled for the alternative arrangement which eventually became his visual calling card. 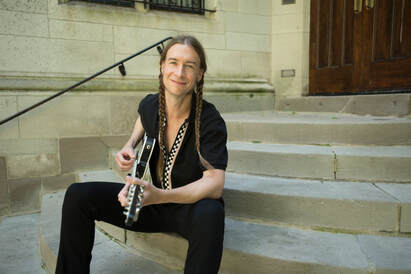 After Firstman, Gambill went on to play in the house band for NBC's LAST CALL WITH CARSON DALY and off-camera found himself on stage with John Mayer, Christina Aguilera, Maroon 5, Peter Frampton, Stevie Nicks and many more. An executive at Hollywood Records hooked him up with pop singer Josh Kelley, which proved to be a career-changer, when Kelley introduced Gambill to his younger brother Charles, then in the process of forming Lady A. On April 1, 2007, Gambill found himself arriving in Nashville, and three months later, he was in the studio recording Lady A' double-platinum, self-titled debut album, for which he co-wrote the track "Slow Down Sister."
Throughout his continuing tenure with the band Gambill never lost sight of his own music, squirreling songs and ideas away as Lady A traveled around the world. After about a decade he decided to start letting the rest of the world hear it. FAKE JAZZ & THEME SONGS -- which features guest appearances by the Dave Matthews Band saxophonist Jeff Coffin, Hanson guitarist Isaac Hanson and vocalist Candace Devine -- was the result of a friend inviting him to play on a jazz festival bill in New Mexico. "I wrote a bunch of songs for the show, and they turned out really well," Gambill says. "That pushed me to get serious about doing my own music again." He followed with LCD during the fall of 2020 (featuring guests Coffin, Mindi Abair, Pierce the Veil's Vic Fuentes, Rival Songs' Michael Miley, put together "24 on 6," a guitar summit to benefit MusiCares Covid-19 relief efforts on which Gambill, 17 other guitarists and several vocalists mashed up Wes Montgomery's "Four on Six" with "Stevie Wonder's "I Wish."
​ 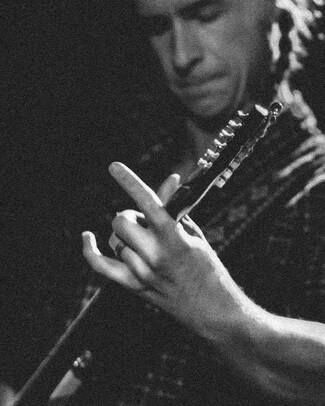 With "Up," meanwhile, Gambill moves into what he calls "vintage Smooth Jazz," revisiting influences he felt from the likes of Benson, Bob James, Dave Grusin, Chuck Mangione and others. "These are all cats that really inspired me," he notes. "That early Smooth Jazz was super cool, a lot of jazz players who were making R&B records." "Up" is, in fact, familiar but also fresh, playful and with a light touch, but not at all lightweight. There's plenty of muscle in its groove and enough musical interplay to show how nicely Gambill plays with others -- including Charlton Singleton from Ranky Tanky, who plays flugelhorn.

The good news is there's more where that came from; Like so many artists Gambill spent much of the pandemic lockdown working on material, building a stockpile that he's been recording both in-person in the studio and virtually. "I've got a whole bunch of stuff in the can now," he says, and Gambill promises listeners will hear both is roots as well as the stems he continues to explore.
"It's honestly, like, a little more jazzy to me, with a little more funk and R&B and maybe gospel going on," Gambill says. "It's a genre I respect and I appreciate that, and it gives me a lot of room to play and push myself. It's really exciting, and the music just keeps coming."
Key Talking Points:
* Played the Grammy Awards 2x with Lady Antebellum
* Performed on Saturday Night Live
​* First TV Appearance in 2005 on The Ellen Degeneres Show, appearing with Josh Kelly
* Member of house band on late night TV with: Last Call with Carson Daily
* Has shared the stage with: John Mayer, Christina Aguilera, Stevie Nicks, Maroon 5, Rob Thomas, Kamasi Washington, Darius Rucker, Vanessa Carlton, Macy Gray, Peter Frampton, Kenny Chesney and countless others.
* Released debut Album (9-6-2019) titled, "Fake Jazz & Theme Songs"
* New Album titled "LCD" released fall of 2020. Visit the Official Website